First cleaned up my work bench and tool cart to have a nice workspace to assemble everything. 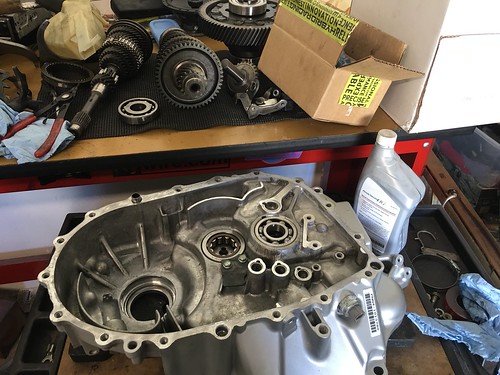 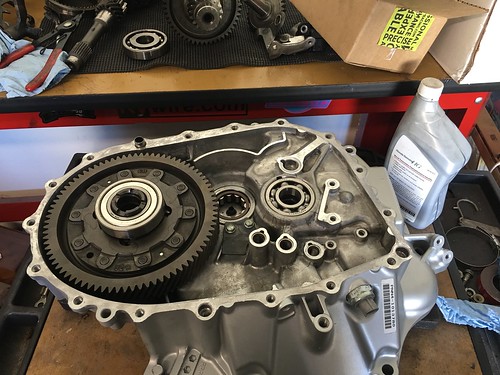 Then the gear sets. 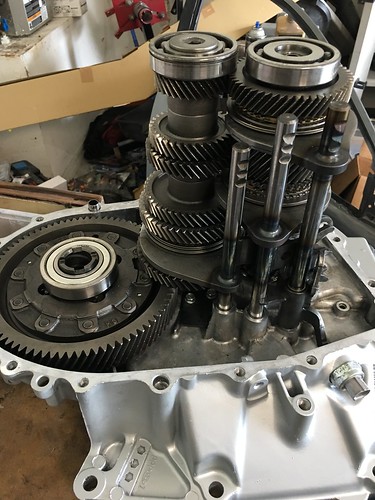 And lastly closing up the freshly painted case. 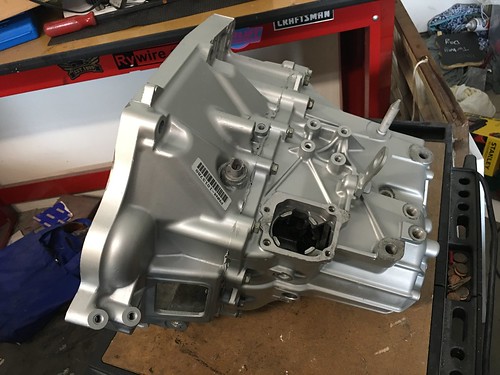 You'll need your basic hand tools. Access to a press if you need to replace any parts on the countershaft. And the only tools you may not just have laying around are a large hex socket set and the specialty lock ring pliers.

This hex socket set included the necessary sockets for rebuilding this transmission. I had a full set but lost my 14mm socket and the only way to get one locally was a $75 set from the parts store. I decided to wait a couple days and ordered this set on Amazon for $15 and it showed up the next day. 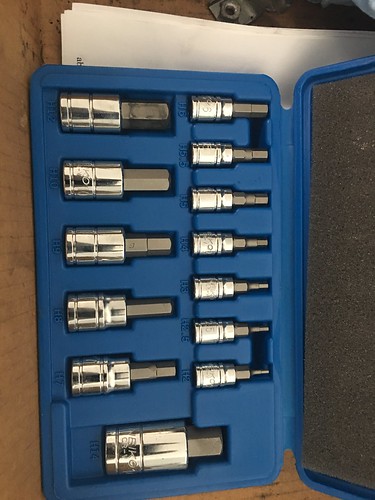 I bought these lock ring pliers years ago for around $15 off a tool truck.
Here is a similar set off Amazon. Don't be that guy fighting with needle nose pliers or a flat head trying to pop the case open.
https://www.amazon.com/Performance-Tool-W88001-Lock-Pliers/dp/B0002KO4BO/ref=sr_1_6?s=hi&ie=UTF8&qid=1535375416&sr=1-6&keywords=lock+ring+pliers 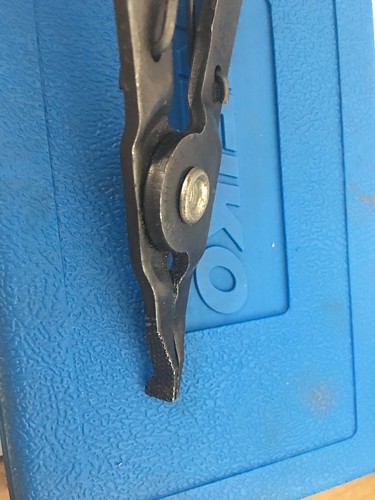 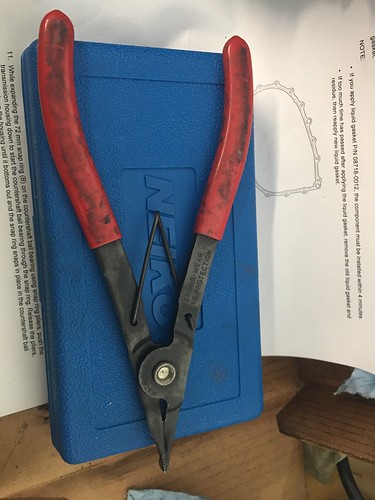 Got a 4040 proportioning valve. I've been checking the local junkyards for parts lately and haven't been able to find one so I just gave up and spent $60 on eBay. Just need to swap out the bracket to the EG one and use some cleaner bolts. 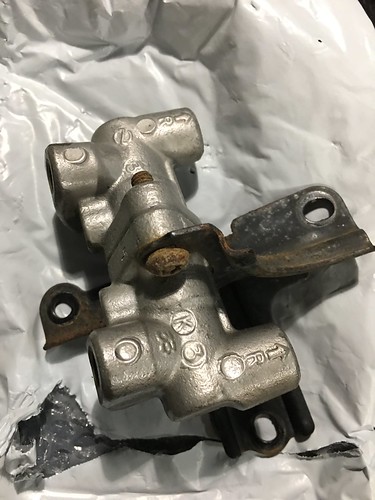 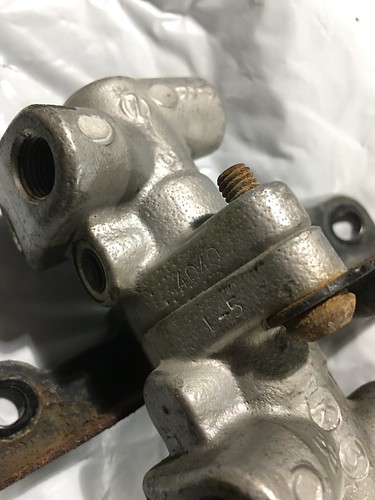 And here is my 98-01 CR-V (w ABS) brake booster. This is the same part # as the ITR and only ran me $60 shipped from a junkyard on the other coast of Florida. I ordered a brand new OEM ITR 1inch master cylinder to go with this. I was hoping it would show up in a little better shape than it did. The booster has some rust and is going to need some sanding and fresh paint before going in. 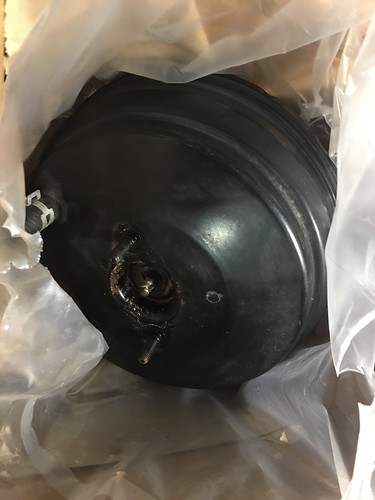 I also tracked down a new front knuckle to replace the broken one I got with my larger front brakes. I'm also going to replace the front wheel bearings and I really need a few new studs. Don't know if I just want to toss in a few replacement OEM ones or just buy and extended stud set.
My TSX Build thread
http://civic-eg.com/forum/viewtopic.php?f=63&t=29580 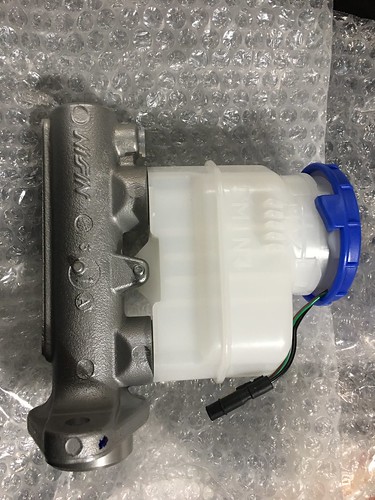 Combined with the larger booster, 4040 prop valve and the rest of the brake upgrades this should be a nice starting point to enjoy this car for now. Won't really be pushing it at all with the stock suspension.
My TSX Build thread
http://civic-eg.com/forum/viewtopic.php?f=63&t=29580 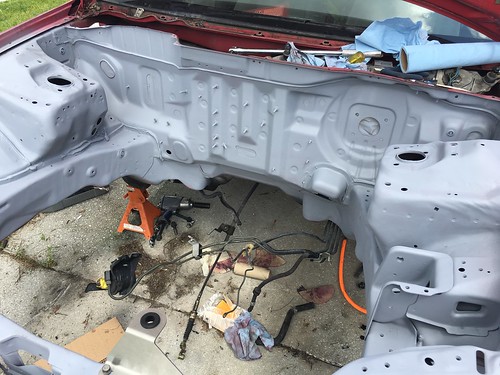 Plan is to mask and paint tomorrow morning. Then to clean and reinstall the subframe. 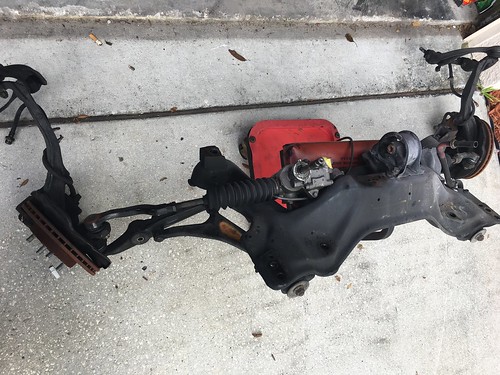 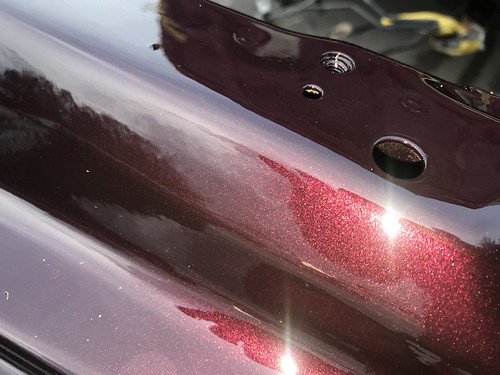 It's far from perfect but for paint I've had laying around for years and a $10 harbor freight spray gun I'm really pleased with the results. A little wetsanding should clean up most of the flaws. No way to keep it perfectly clean when painting outside.
My TSX Build thread
http://civic-eg.com/forum/viewtopic.php?f=63&t=29580 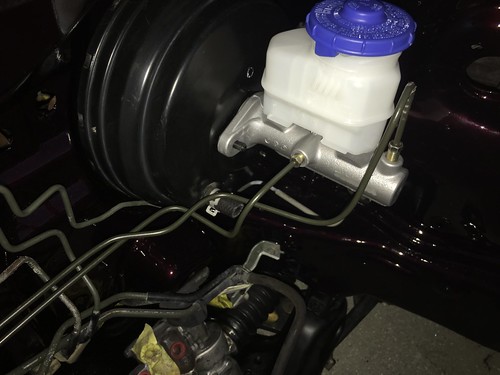 And finally a shot of the bay. Like I said not tucking anything but definitely trying to keep it clean and simple.

I'm really liking the black cherry pearl paint color. Might have to do the whole car now... 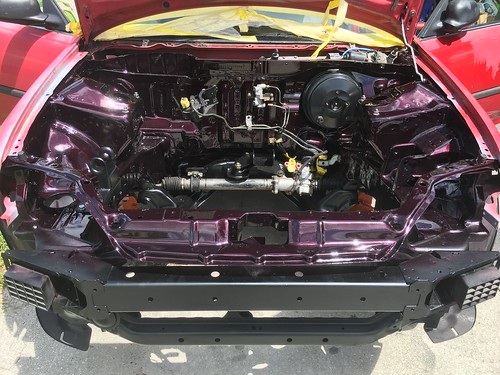 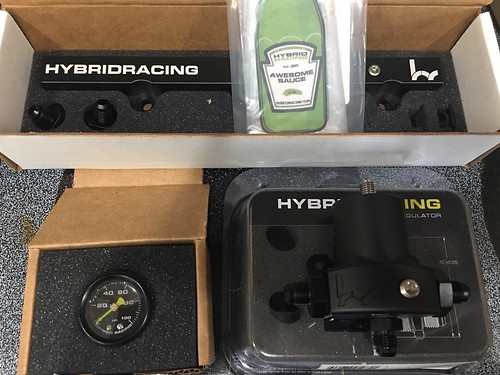 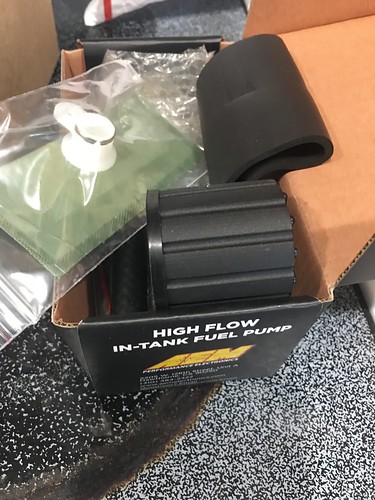 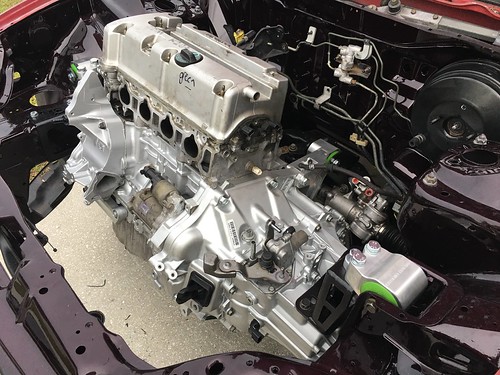 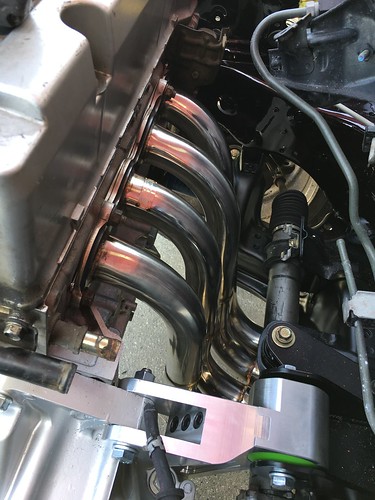 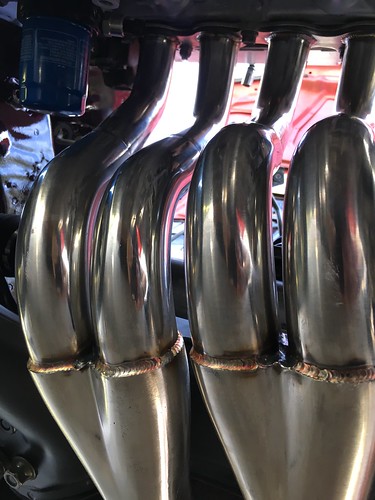 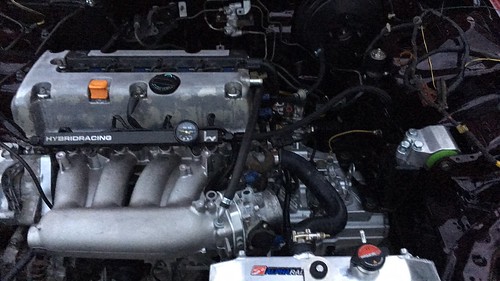 Good news is no fuel leaks, no oil leaks, and everything sounds healthy. As soon as I have the heater core and radiator back in I'll be sure to load up a video.

Even though it started right up still have some issues to work out almost all of them are related to the radiator choice I made. I went with a Karcepts upper mount and a Skunk2 Alpha 92-95 civic radiator instead of buying the HR K swap one as it was/is out of stock.

The engine with the RBC manifold sits pretty far forward in the engine bay. Using the Skunk2 Alpha radiator the upper hose is maybe 1/4 inch from hitting the TPS and the RBC itself is maybe an inch from the radiator (which is fine). I pulled the radiator back out and I'm taking it to a friends shop to have the upper hose fitting moved further to the drivers side. This should allow the upper hose to fit nicely and prove clearance for the TPS and my intake. I am also having him weld a 90 turn into the lower hose fitting. This should allow me to have a nearly straight piece of hose for the lower hose.

The other issue is the IACV sits so close to the radiator the connector won't attach. I had the option of getting the K tuned IACV rotation plate to flip it around or to block it off. I chose the Karcepts block off plate which will be here Thursday. I do have AC going in with the swap so I will be ordering the rotation plate in the near future I think I'll be needing it however the block off was less than half the price and I really just want to get this thing driving again I can deal with the idle drop when the AC kicks on later.

I also discovered my heater core was leaking so I ordered a replacement one. As soon as this shows up I'll be able to reassemble the interior and install the AC parts.

Overall it's coming together and will hopefully be driving soon!

While I'm waiting on the heater core and radiator modifications I'll work on finishing up the brakes and installing the axles. Hopefully this weekend I can take this out for a lap of my neighborhood and work out any other bugs I find.

Also need to drop off my other valve cover at the powder coating shop so I can take this half paint stripped one off. This is the one intended for my TSX.
My TSX Build thread
http://civic-eg.com/forum/viewtopic.php?f=63&t=29580

Got my Karcepts Idle control delete plate in. I also ordered their cruise control delete kit and billet throttle bracket. The OEM bracket would have worked it was just barely touching my fuel lines which I didn't like. I figured better to go ahead and replace it now not wait until it causes an issue. The only thing left to do with the throttle is to find a fitting for the adapter plate that will let me run a vacuum line to the reference port on my fuel pressure reg. 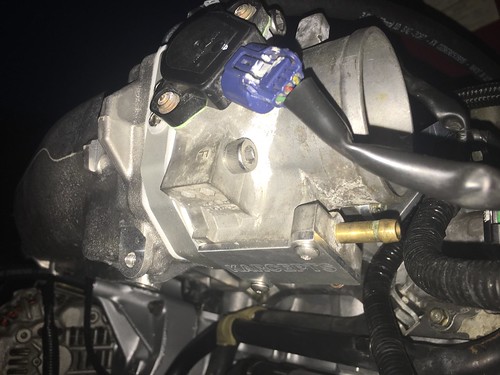 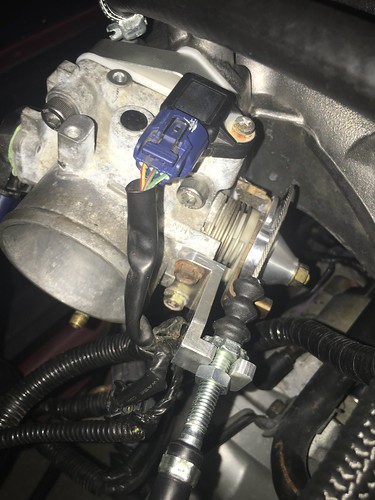 I also pulled out my radiator to have the hose fittings moved/modified. The upper location will be moved over to the sharpie marks and the lower will be coming out with a 90 degree bend facing the passenger side. This should get rid of the hose fitment issues I have. I already know the modifications will not be up to my standards, took it to a local shop and asked for it done ASAP and it's going to be done using spare parts from their shop instead of waiting on fresh parts from Summit. I went ahead and ordered the HR radiator and hoses, which won't be available until December. 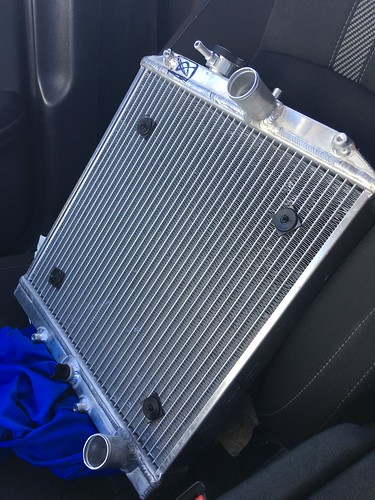 And here's a quick video of it running before I pulled the radiator and hoses. Click the picture to get redirected to Flickr where the video will play. 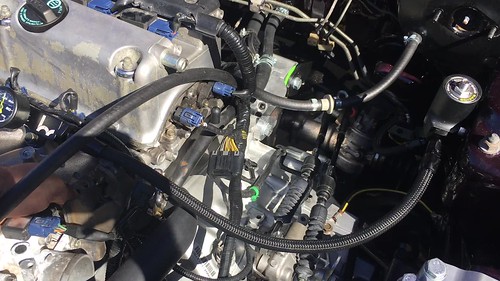 I'm working out some little bugs with the swap and then I'm going back to fixing the cosmetic issues. Hoping to paint the whole car soon.

I'm going to try to have some pictures and videos soon for you all. I just need to finish wiring the speedometer instead of using a GPS and to finish putting the center console all back together.
My TSX Build thread
http://civic-eg.com/forum/viewtopic.php?f=63&t=29580

By EconoBox - Fri Dec 21, 2018 4:03 pm
- Fri Dec 21, 2018 4:03 pm #6908868 Been enjoying driving the car for a little bit now. Surprisingly the really cheap 3 inch exhaust is working out great. Spent $40 at a local shop to have it modified to line up with the K swap header. It sounds pretty great most of the time. There are a few little rpm ranges were there is a rasp that I hate. Had the car up on a lift at work to install the e-brake cables so I snapped a picture. Skunk2 Alpha K swap header into a small 2.5inch to 3inch step up right into the 3 inch exhaust. 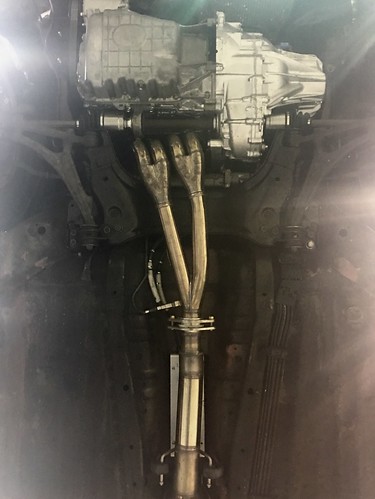 Also popped some amber LEDS from superbrightleds into my gauge cluster and my climate control. Honestly I'm really happy with how they look in the climate control. In the JDM cluster they are still really dim. I'm going to have to mess with it and see if there is anything I can do to brighten them up since the JDM cluster doesn't use the dimmer switch there must be some kind of built in voltage regulator I can probably bypass. I'm going to look at the circuit from my USDM cluster and see If I can figure it out. 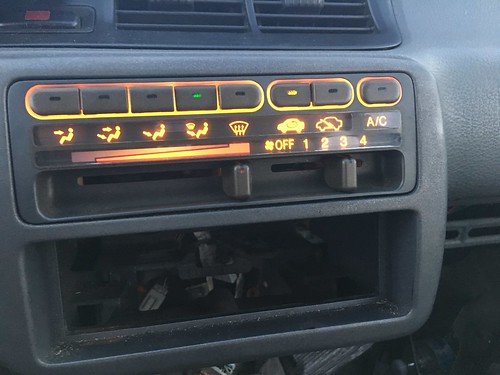 I'll have more updates and some videos once I have time to finish tuning the car.
My TSX Build thread
http://civic-eg.com/forum/viewtopic.php?f=63&t=29580