New members NEED to read the following:
'Rules & Guidelines' 'Using the Search Feature' 'Where should I post my Topic?' before posting on this forum!
Reply

I haven't been on this forum since 2011 but at the time I had a 95 CX Hatch with a D15B7 that I was doing a mini restoration on. I ended up selling the car to a shop that wanted the shell for a time attack project. I have no idea if it ever got to the track or not but I hope someone was able to enjoy it.

Many years later I am back with an EJ8, I know it's not an EG but it has a D15B engine, and I figured this was the best place to come to learn more about the D-Series motors and find answers to questions.

I am super confused about certain things with this engine.. and hopefully I will figure it out on this forum.

Here are some pics and info.
Block Stamp: D15B
Head Stamp: P08-1
OBD II
Top image is when I bought it, bottom is after I have fiddled with it. 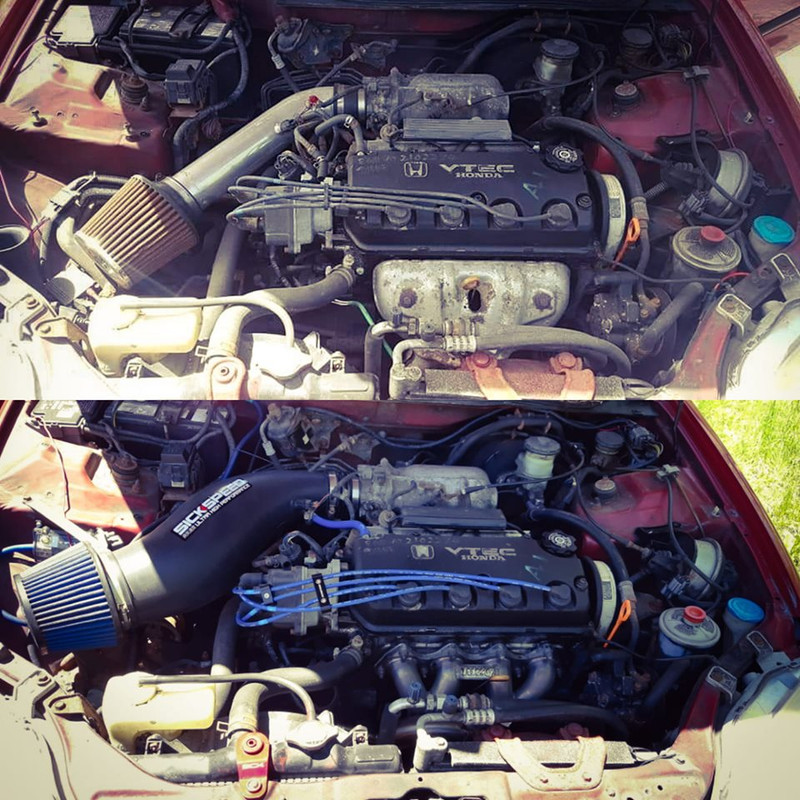 I spent the past week doing some body work, colour doesn't match 100% but it's better than rust. Did it in the driveway and used rattle cans.

Just a temp. fix to get it through the winter for the most part. Will be buying replacement patch panels and doing it properly next year.

So far in the year and a bit I have had the car.. I have done mostly maintenance that it desperately needed. Replaced the ignition switch, spark plugs, wires, oil change, properly fitting intake, shifter bushings, rotors and pads, upper and lower ball joints, inner and outer tie rods. Popped in a Megan racing short throw, 1320 uel header and a yonaka cat back. Bought a set of drag dr20s 16x7 for the time being until I can get the wheels I want (Zelda Tri Force or Super Advans) I have a thing for tri spoke wheels.

Next year I plan on lowering it on Teins, replacing the bushings in the rear end, maybe go the ASR rear sway route with lower control arms.

Leaving the motor alone, it runs well as it is. I do want to build a spare d16z6 or find another d15b for boost but nothing insane, just make it a bit more fun as a daily.

That's about it for now. It took me a while to like the car but the more i start de-stocking it, the more I like it. I do love the cheap parts, fuel, and the reliability is fantastic.

My first question, why does this car have two dip sticks? I can't seem to find a straight answer. They both have oil, i keep them both fairly equal on the stick just because I really don't know so why let one or the other go dry? It's a 5spd, so it wouldn't be a tranny dipstick? I didn't think Honda's had tranny dipsticks in manuals... My last one didn't, and it was basically the same motor just non vtec.

For the 2 dipstick thing... Your engine is a mutt of newer and older parts. 92-95 EG civics have the dipstick on the front of the block, behind the header, while the 96-00 EK's had it over on the front cover of the engine.
Do Not PM me your technical questions. Post them in the forum!